10 questions about the criminal justice system worth exploring 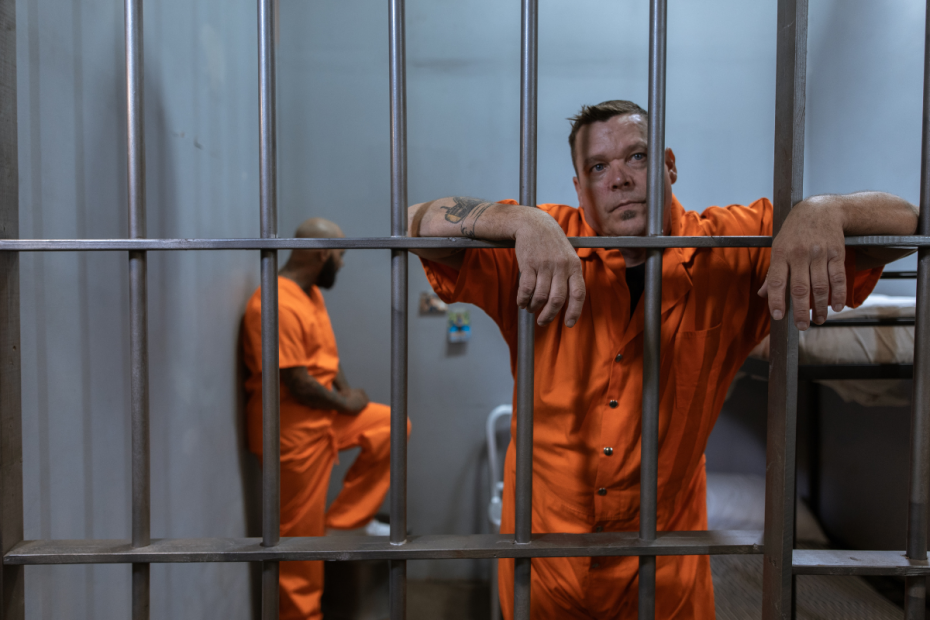 Kyle here, Founder and Executive Director of Determination, Incorporated. It’s been a season of reflection and planning here at our organization. As I look back on how we got started, what we’ve learned, and where we’re headed, I’m reminded that curiosity which grew into compassion, more than anything, are what led me down this path.

I wanted to share with you 10 questions that piqued my curiosity on this journey. I’ll share answers from reputable sources, but just know going in that depending on how you slice the data or how you frame the research, the answers vary.

I hope you find a few of these nuggets interesting, and that maybe you’ll continue to follow your curiosity as well. Who knows where it will take you. Maybe you’ll find a new calling or feel reinvigorated about your current one. Maybe you’ll change your perspective which will lead to a change in action. Or maybe you’ll just make a new friend who you never would’ve met had you not followed the questions in your heart. There’s value in all of those. Please, keep asking questions and always keep your heart open to learning more.

Click on the linked question to jump straight to the answer:

Add to these numbers probation, federal prisons, and jails, and the numbers dramatically increase (read more about over-incarceration in the U.S.).

2. How much does it cost to incarcerate a person for one year?

3. Are there racial disparities in Missouri and Kansas prisons?

White people are the majority population in both Missouri and Kansas prisons.

4. What crimes are people in prison for?

The top 3 offenses for men in Missouri prisons are:

Kansas reports on offenses in much more general categories. For men and women the top 3 offenses are:

5. Why do people commit crimes?

In reality, there are as many reasons people commit crimes as there are people in prison. Everyone’s journey, biology, and circumstances are unique. People are sentenced to prison for committing antisocial acts (i.e. cheating, lying, aggression, substance use, theft, and violence,) but what factors lead to those behaviors? This publication from the Waterloo Region Crime Prevention Council in Canada on the “Root Causes of Crime” gives a good summary of the research on some risk factors that increase the likelihood of crime:

Another report from the British government that has been inspirational to the development of our programming at Determination, Incorporated asks “What helps people desist from crime?” (Desist meaning stop committing.) The research literature identified nine critical factors:

6. What happens to a person’s children when they go to prison?

When a parent with a dependent child (or children) goes to prison, the child will live with the other parent, a family member, or be sent to foster care. More than five million children, representing seven percent of all U.S. children, have ever had a parent who lived with them go to jail or prison. This proportion is higher among black, poor, and rural children.

Studies show that communities with a high rate of incarceration are no more safe than others and the children in the community have worse cognitive outcomes. Worse still, children of incarcerated parents are six times more likely than their peers to become incarcerated. Incarceration doesn’t just affect families now, it has terrible consequences for generations.

There is a lot to unpack on this topic. If you wish to go deep, check out “Hidden Consequences: The Impact of Incarceration on Dependent Children” from the National Institute of Justice and “Parents Behind Bars: What Happens to Their Children?” from Child Trends.

Here are just a few notable things from those reports:

One more note from those reports before we move on from this very important topic: “Many children of incarcerated parents face profound adversity… But the research shows that some children develop resilience despite the risks if they have a strong social support system. Through visits, letter writing, and other forms of contact, an incarcerated parent can play an important positive role in a child’s sphere of support. In some circumstances (i.e., if the child did not have a relationship or had a poor relationship with the parent before incarceration), continued contact may have little value and even be detrimental to the child.”

Returning to prison is known as “recidivism,” and there is an important distinction to be made. A person can recidivate (return to prison) due to a new criminal conviction OR a technical violation of their parole. A technical violation of parole includes a “violation of any of the conditions of parole or conditional release” and can include failing to report for scheduled office visits, missing a curfew, lack of employment, testing positive for drug or alcohol use, or associating with someone else who is on parole. In both Missouri and Kansas, more parolees are returned to prison each year for technical violations than for new criminal convictions.

People return to prison for a variety of reasons. The Missouri Department of Corrections uses the Ohio Risk Assessment System to identify risk factors that could lead to recidivism (also known as “criminogenic needs.”) These risk factors fall in the categories of anti-social attitudes, anti-social peers, anti-social personality, pro-social leisure activities, education/employment, substance use, family/social support, and anti-social history.

While recidivism is an important factor to consider when evaluating a person’s success after prison, there are many factors, including housing, employment, and self-identity, that help a person to desist from crime. To dive deep into that subject, check out “Recidivism Reconsidered: Measuring Success After Prison”.

8. How does having a felony record and a history of incarceration affect someone after they are released from prison?

According to a study from the Prison Policy Initiative, formerly incarcerated people are almost 10 times more likely to be homeless than the general public. According to the National Low Income Housing Coalition, “The causes of homelessness among former prisoners include discrimination, a reliance on criminal records to screen potential tenants, the shortage of affordable housing, large security deposits, and other application requirements like professional references.”

Kansas City, Missouri, passed a Ban the Box ordinance in 2018 that stops KC-based employers from asking about criminal history on an initial job application and asks landlords to consider more than just a criminal background check in their tenant screening process. The ordinance does not completely remove criminal history as a factor in hiring or renting decisions, and it lacks teeth if it is not enforced.

The barriers to success for formerly incarcerated people don’t stop at just housing and employment. Researchers for the American Bar Association counted as many as 46,000 collateral consequences of a criminal record scattered throughout state and federal codes, with thousands more at the local level. Collateral consequences are defined as a “combination of laws, rules, and biases forming barriers that block them from jobs, housing, and fundamental participation in our political, economic, and cultural life.”

One type of collateral consequence is “felony disenfranchisement” or not being able to vote due to a felony conviction. In Missouri and Kansas, people lose their right to vote when they are convicted of a felony. Those rights can be restored by re-registering to vote only after the person completes their full sentence, including parole. In Kansas, people who have completed their sentences must also pay off any lingering fines or fees associated with their sentence.

9. Does incarceration work as a crime deterrent?

No. According to the National Institute of Justice, “sending an individual convicted of a crime to prison isn’t a very effective way to deter crime.” Instead, “the certainty of being caught is a vastly more powerful deterrent than the punishment.”

It is important to note that while we may like to think that prisons are for “rehabilitation” and “corrections,” the reality is that our criminal justice system mainly utilizes prisons for “punishment” and “incapacitation.”

Here is the summary from the Vera Institute of Justice report, “The Prison Paradox: More Incarceration Will Not Make Us Safer”:

Read more: “Is Incarceration Still the Answer? The Impact of Current Policies & Possible Alternatives” from the University of Missouri Institute for Public Policy.

10. Are their alternatives to incarceration that can still keep our communities safe?

Yes. Alternatives to incarceration, for instance probation where a person is placed on community supervision, have been shown to be as, if not more effective than incarceration (the same if not lower recidivism rates) at a lower cost to the taxpayer. It can cost upwards of seven times more to incarcerate a person for one year versus placing them on probation.

Other alternatives to incarceration include:

Taxpayer dollars saved through alternatives to incarceration can be reallocated to violence prevention programs, social services in the community, and other public safety priorities.

11. Bonus question: What can I do to help curb mass incarceration in my lifetime?

Of course, one important thing you can do to curb mass incarceration is to vote for elected officials who believe in lowering prison populations and increasing public safety and wellness. Ask your elected officials where they stand on these issues and raise awareness amongst your friends. In political discourse, many have become so accustomed to “law and order” speech and “tough on crime” policies that they forget to look at the data.

One last thing. For mass incarceration to ever change, we as Americans have to change the way we think about “criminals” and formerly incarcerated people. I encourage you to explore the ways that your language and actions stigmatizes and ostracizes people with criminal records. When companies use “we use background checks” as a shorthand for “you can trust us” and when individuals say “lock them up” everytime they hear about an incident in the news, they fail to see how their words are further exacerbating preconceived notions and stigmas.
If you’ve made it this far… thank you. I hope you make it a point to memorize at least one new data point from this article. And I hope that you will continue to follow your curiosity. Please reach out if you would like to connect on this topic further (email: kylejsmith@determinationincorporated.com) and thank you for supporting Determination, Incorporated. Our vision is that formerly incarcerated people, by starting viable, hiring businesses, will help to solve the problem of recidivism and ultimately end mass incarceration. We can’t do that without you.

Sign up to receive second chance entrepreneur stories in your inbox in our High Five Thursday newsletter.

I want to invest in the Determination, Incorporated second chance entrepreneur community. For $20 a month or a $250 one-time investment, I will receive a free INVESTOR t-shirt.

Your “investment” is a tax-deductible donation to Determination, Incorporated, a 501C3 nonprofit.